Bad Photos - You Can Still Use Them!

We've all taken - or scanned - bad photos that we might still want to use in a layout so here are a few ideas on how to get creative with them. First of all don't worry about the being an expert photographer. Very few scrapbookers are (even the ones who think they are). It's all meant to be fun! Sometimes a bad photo is the only one you have so use it and don't worry about the quality.

You don't need me to tell you to take lots of photos so you have plenty to choose from but sometimes you can get stuck on a layout and wonder why it's going wrong when what you need to do is choose a different photo. Try it and see.

There are a gazillion articles on the internet about cropping photos for scrapbooking so all I will say here is DON'T always follow the rules. Conventional wisdom would suggest that a) I crop most of the sea out of this photo, and/or b) I move Mum to the left of the page so she's running into it. I think it looks better like this as she's running along so fast she's running OUT of the photo. Kit is Lindsay Jane's Another Day In Paradise. 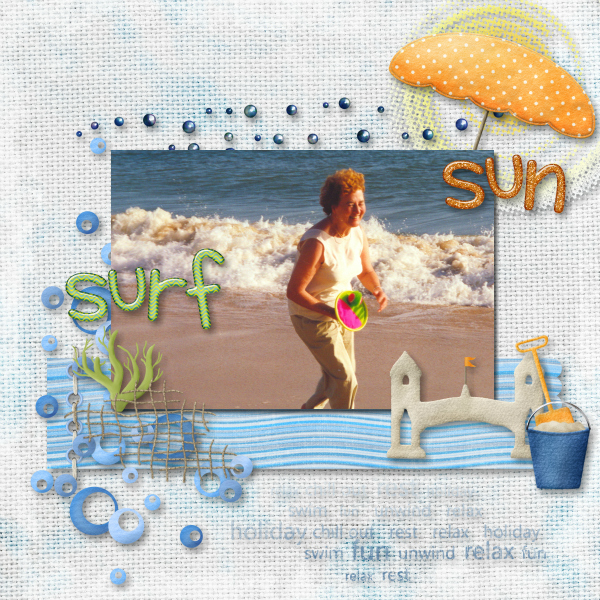 This photo of my cousins at the seaside had faded somewhat but it's such a lovely shot I wanted to use it with a bright kit. This fix was done with the auto adjust function in Picmonkey. It needs more adjustment as the sky is a bit turquoise but this shows you the difference one click can make. There are lots of adjustments you can make in (free) Picmonkey and nothing damages your original so it's worth a go. 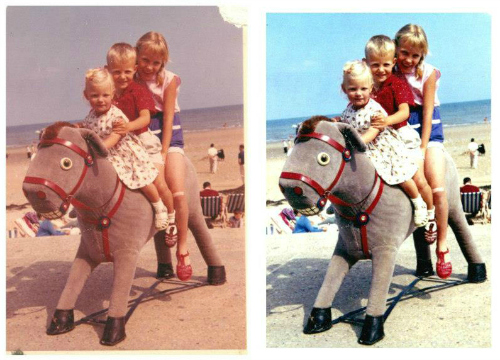 Yes, it is possible to rotate the restored version so that the sea is on a level but I tend to do that bit once it's going in a layout then I can disguise and missing corners caused by the rotation rather than having to crop it really tightly.

NEVER throw away old photos just because you think they're too damaged to use. You will one day learn how to repair them. I repaired this one in Paint Shop Pro. The little girl is my mother-in-law and fortunately I had other photos of that day so I knew what her swimsuit should look like. This took me about 6 hours! 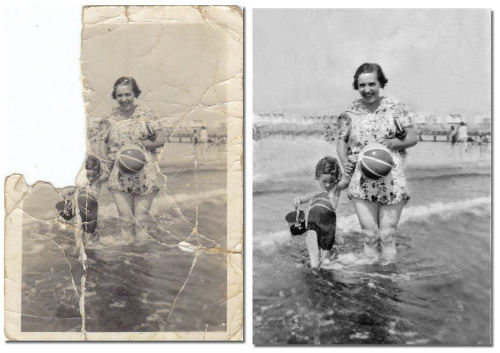 I made the restored photo greyscale but turned it back into a sepia version in one of the pages I made with it. This is a quickpage from the seashells and Seashore collection by Raspberry Road Designs. 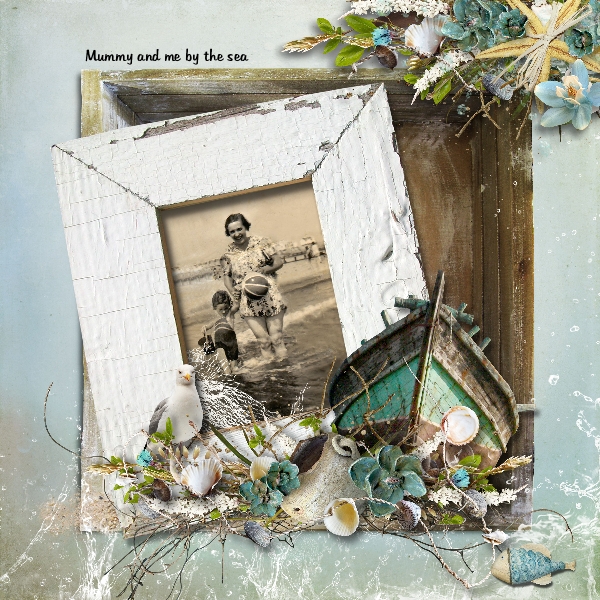 Make a feature out of a damaged photo

My parents went to Miami with my brothers and a family friend in 1981. Yes, it is terrible that I didn't get to go. The photo album was left in an airing cupboard under the tank and the tank leaked. I've managed to restore about half of them but couldn't do anything with this group shot which had been a great photo. My brother had a print in a frame but it was very faded so I used that but turned it black and white. It's often worth trying this when you just can't restore a coloured photo to its original state.

I used Everybody Should Have An Ocean by Libby Pritchett: 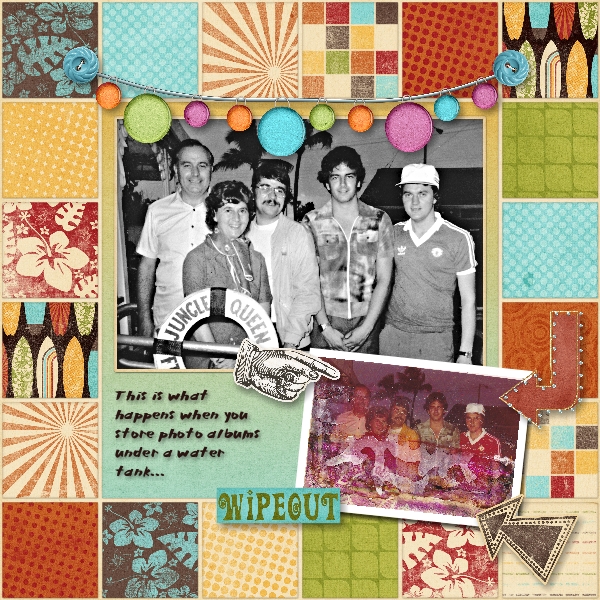 Out of focus photos

There was nothing I could do with this tiny photo of my Dad at the beach, except tweak it a little with the Sharpen effect in Picmonkey. It didn't matter, I still wanted to make a page out of it. After all, it's my young Dad at the beach! So I used a quickpage that made a feature out of a tiny photo ... 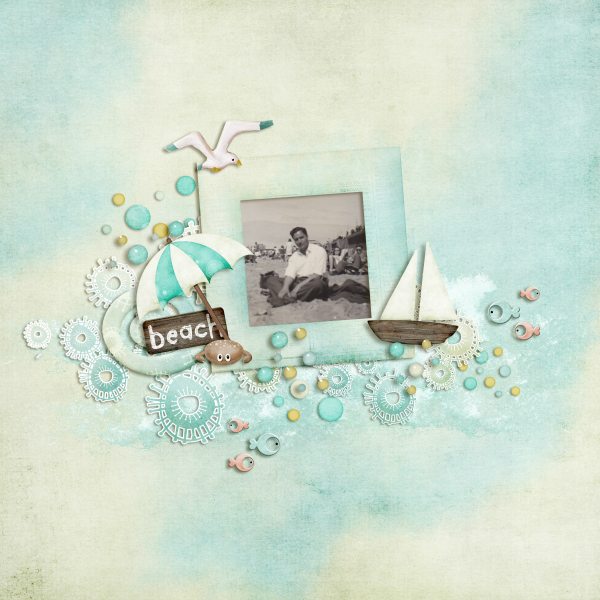 The other thing you can do with out of focus photos is to use them as a background and reduce the opacity. There's an article on that technique HERE.

Is it blurry because someone forgot to stand still or they were actually moving doing something? This photo is blurred because my little rabbit dolly used to dig very very fast. The lawn had a hole before you realised she was digging! So the blurred photo gets a page. I used the Sandbox Summer template by FayETTE Designs. 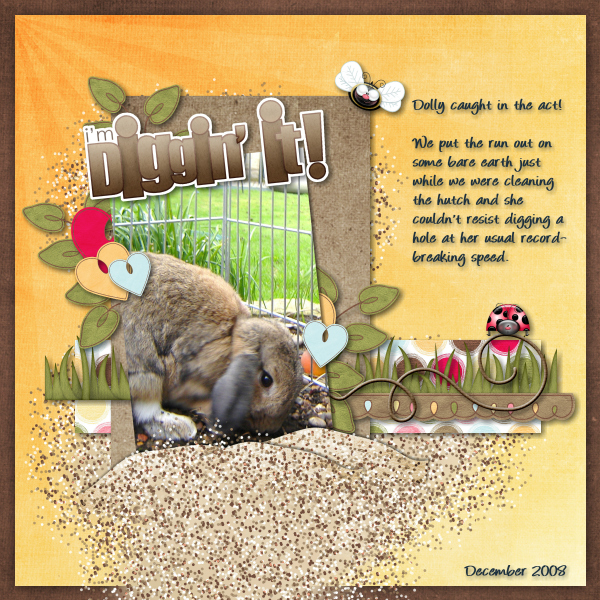 Didn't quite get the shot?

Use it anyway! Hubby didn't get my whole  head in for this beach shot but I think it looks amusing so in it goes! 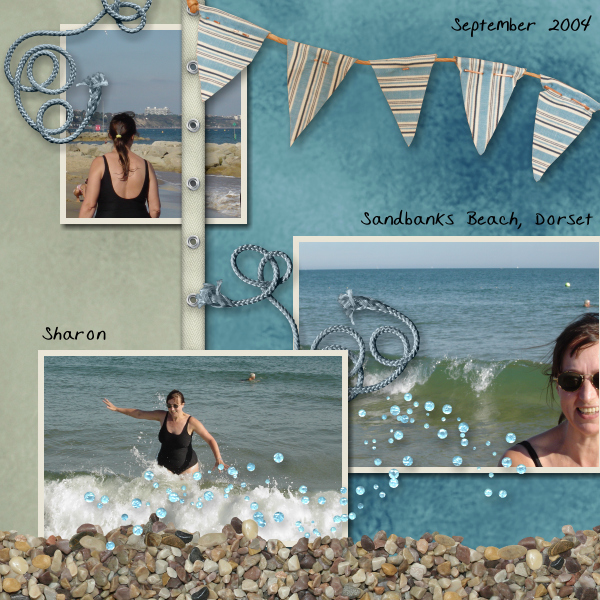 This photo is hopeless. It was getting dark, I seem to have a dayglo volleyball net going through my head and I'm right at the bottom of it. Just as well really since I'd have to spend time making myself thinner if it included the bottom half.... I used it anyway with the muted colours of this Beachy Keen kit from Natalie's Place Designs. It just so happened that the word challenge on Digi Scrapping Divas the next day was "vertical". The title and the place and date text go over the more boring bits of the photo but the height of the photo gives some idea how long the beach is. I cropped one fat arm out of the picture and moved the word art over the other one! 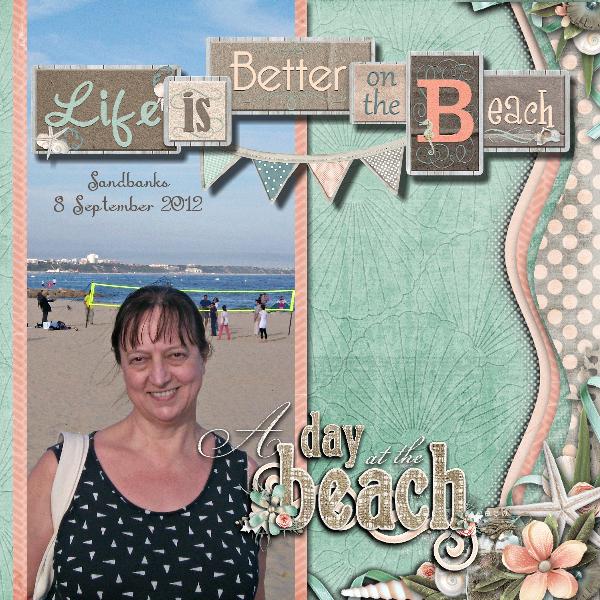 Have fun with your photos! That's what it's all about.